On Christmas Eve, a whole 50 years ago, at 11:05pm, the first of the BBC's now long running A Ghost Story for Christmas series aired on BBC One. As fans well know, while it wasn't the first adaptation of an M.R. James story done for the channel, The Stalls of Barchester, and the ones that followed, every Christmas, until 1978 (the series would later be revived in 2005), really set the template for a tradition that thankfully, continues to this day. A new adaptation, from Mark Gatiss, of James' story The Mezzotint is set to air tomorrow night, on BBC Two, at 22:30. I love this whole series, which has been a big part of my seasonal viewing for a good few years now, and Stalls has long been one of my favourites. In the following post, I'll attempt to say why. 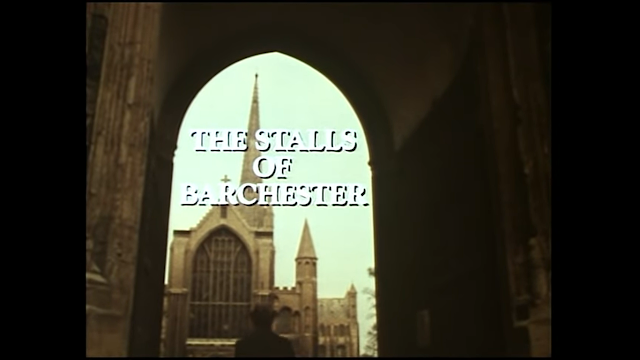 First of all, and right from the off, with its cathedral setting, church music, and general religious ambience, it's perhaps the one of the series that feels most appropriate to this season. There's some snow glimpsed in the background in at least one scene, and another is set round new year. From the opening shot, with Clive Swift walking through the cathedral grounds, bells ringing in the background, it makes me feel strangely festive. 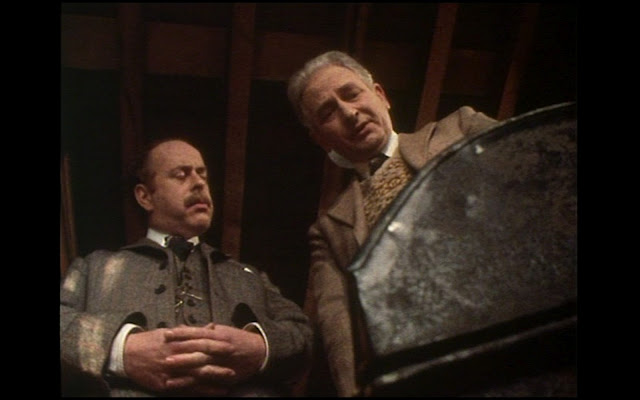 Speaking of the late, great, Mr. Swift, who sadly passed away in 2019, aged 82, he and his character, Dr. Black (who I'm glad they decided to bring back the following year, for A Warning to the Curious) work wonderfully as a narrator and M.R. James surrogate, setting up the story and relaying it to us. In this regard, and generally speaking, the adaptation is remarkably faithful to the original story. If memory serves, where it mainly departs, is in one of the latter scenes, where we see the demise of Dr. Haynes, as opposed to hearing about it, via an obituary, in the story. 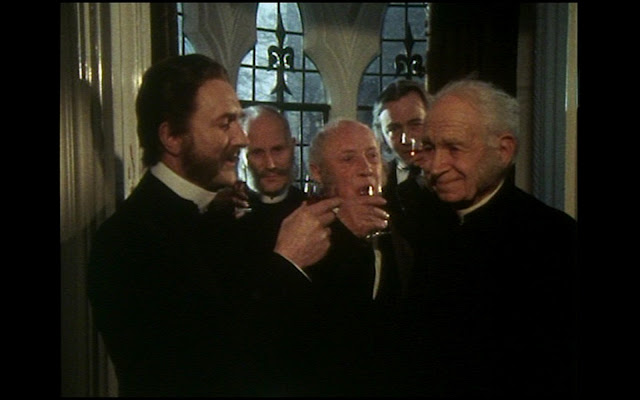 Dr. Haynes, brings me, of course, to the also wonderful Robert Hardy, who, according to writer and director Lawrence Gordon Clark, loved M.R. James. He, like Swift, and everyone in this, is perfectly cast, and conveys, in the earlier scenes, a hilariously impatient irritation with his superior, the Archdeacon Pulteney (Harold Bennett), who through his apparent vitality and longevity, refuses to depart his post, until, it seems, through some conspiring between Haynes and Pulteney's maid (Penny Service), he takes a tumble down his stairs and dies. And later, as Haynes starts to become haunted by the forces that his murderous intervention has unleashed, and further on still, as this oppression becomes more and more unbearable, Hardy perfectly projects the look of a man who while trying to keep his stiff upper lip, is clearly under strain. 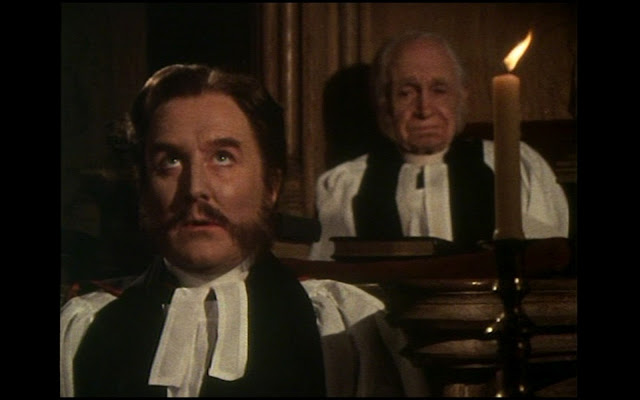 A few more notes on the cast. Thelma Barlow, who plays Haynes' sister, Letitia, was amusing for me to see in this, seeing as she was on Coronation Street for many years, and later, dinnerladies. She's wonderfully sympathetic, making her, as Haynes' tells us and we see, very much missed by him when she has to leave as the weather gets cold, on account of her health. David Pugh, like Swift, would reappear a year later in A Warning to the Curious, but playing a different character. And Ambrose Coghill was in the 1968 James adaptation, Whistle and I'll Come to You, which, of course, was a big influence on this series. If memory serves, his museum creator gets the final line in this. Again, everyone is perfectly cast. 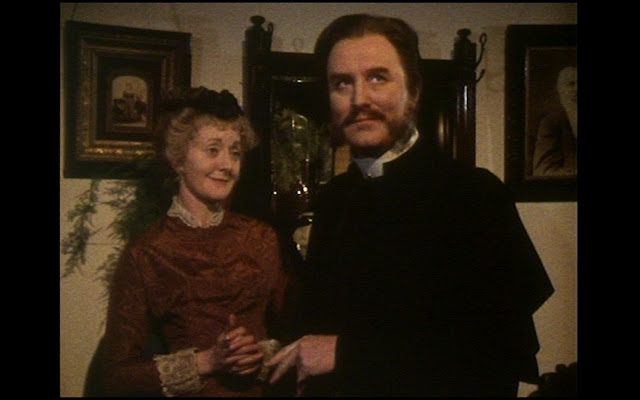 Moving on to the crew, first and foremost, Lawrence Gordon Clark brought both his love for James (inherited from his father, who read the stories to a young Lawrence and terrified him with them), and his experience as a documentary filmmaker to this series, the latter helping to ground the stories in a way that (following James' example in setting the scene) later makes the intrusions of supernatural forces all the more uncanny and frightening. And also, I think it gave him great experience in terms of both finding locations, shooting there, and knowing how to make the most out of them. 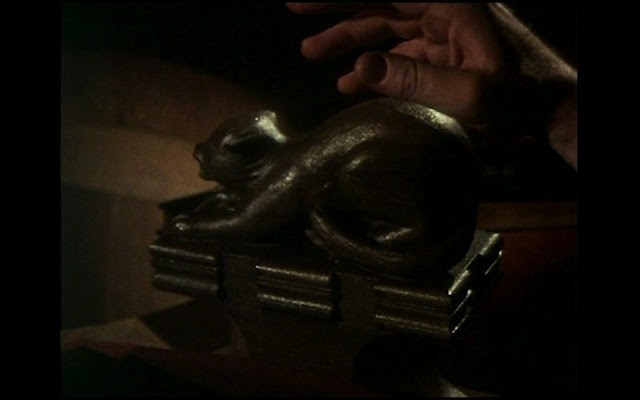 Helping him here was cinematographer John McGlashan, who, I just saw, passed away on April 1st of this year. Also a veteran of documentaries, his work on this, and all the other James adaptations Clark would do from A Warning to the Curious, through to The Ash Tree in 1975, is really stunning. If the elements exist for it to happen, I'd love to see these get upgraded to Blu-Ray sometime, as great as the DVDs already are. There's some nice use of high and low angles. I adore his lighting in the darker scenes especially, which are wonderfully moody and atmospheric. And there's some great staging with the scare scenes, both in the titular stalls, and the archdeacon's house. 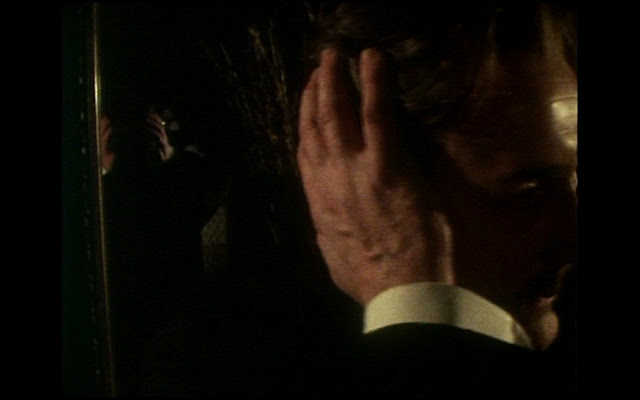 Speaking of staging, and specifically the stall scenes, that brings me to the sound, and also back to the music. When the change is coming over them, there's some creepily effective manipulations of the music (specifically Psalm 109, I think), which feel very otherworldly, and are no doubt the work of the sound department's technicians Dick Manton, dubbing editor, the perfectly named Ian Pitch, and dubbing mixer Alan Dykes. 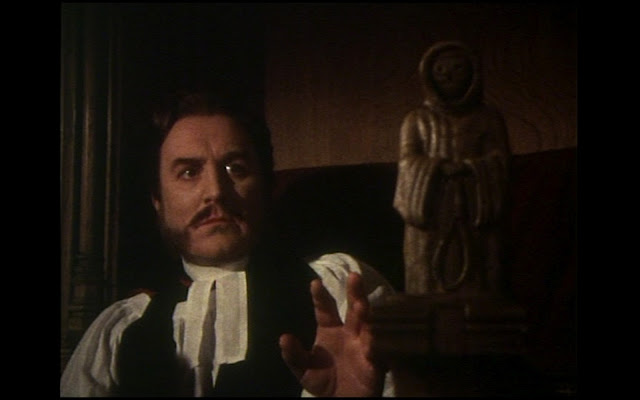 There's more to say, I'm sure, but I've presents to wrap, and other things to watch tonight too (specifically, I'm thinking of watching Clark's 1979 adaptation of Casting the Runes, which I've had the DVD of for ages and have never seen). So speaking of wrapping, let's wrap this post up... 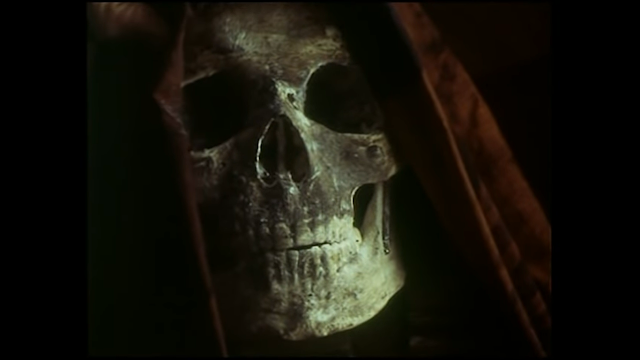 While later entries in this series may be more effective overall, this, for me, still feels spot on, and Clark's approach seems to have come out fully formed, so to speak, from the get go. And while I watched this earlier in the week to take notes, I'll no doubt watch it again tomorrow night, after the aforementioned new adaptation of The Mezzotint, to mark its 50th anniversary, and a half century of this wonderful series. 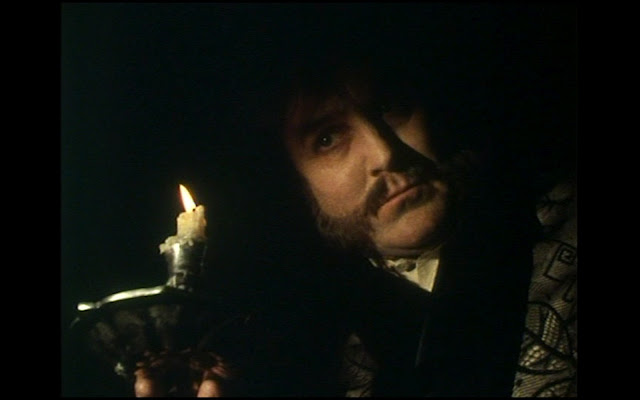 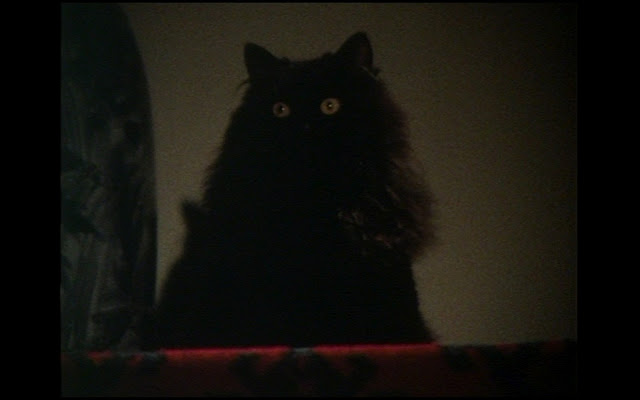