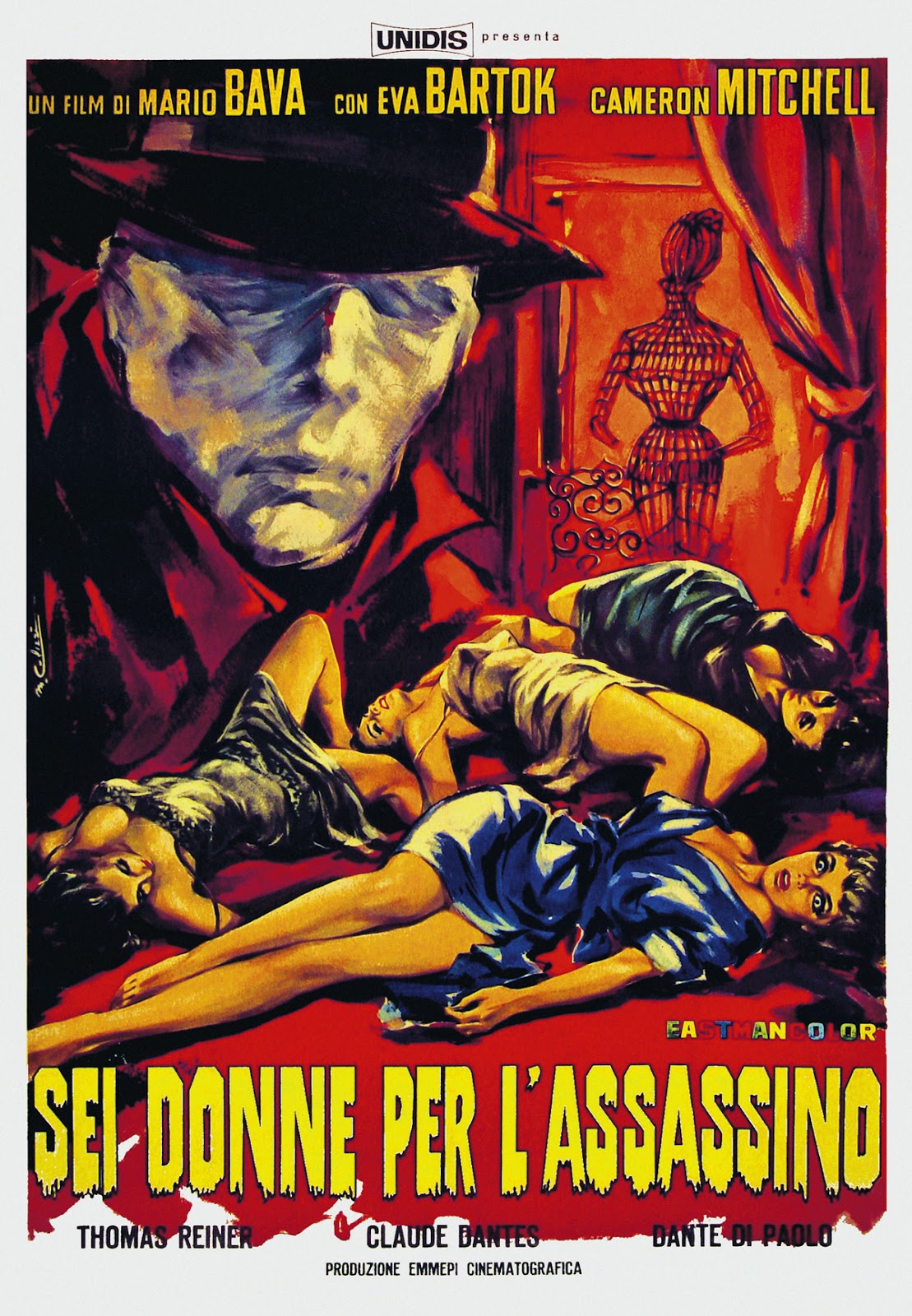 Going under the (potentially erroneous) assumption that the date on IMDb is correct, it seems that Mario Bava's seminal thriller was released in Italy a whole half century ago today. Perhaps unsurprisingly, this monumental movie has been discussed and dissected to death already, so there's not much I can really bring to the proverbial table... but nevertheless, I couldn't let such an anniversary pass without posting a few words of appreciation for the film. 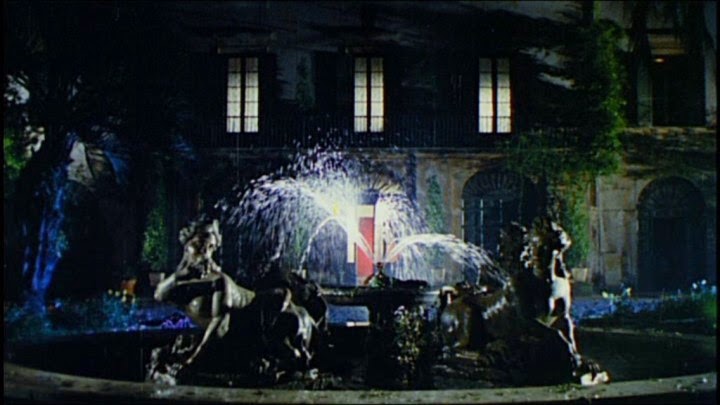 For the uninitiated, Blood and Black Lace is generally considered to be the first fully formed example of an Italian exploitation sub-genre known as the giallo. Basically this is the Italian word for yellow and became synonymous with a series of murder mystery pulp magazines whose covers were said colour. Bava's earlier black and white film The Girl Who Knew Too Much is commonly referred to as the first giallo... however, it turns out this is probably not really the case. As Jay Slater states in the liner notes for Arrow Video's Blu-Ray release of yet another seminal Bava flick, A Bay of Blood aka Twitch of the Death Nerve (etc, etc): "No one is entirely sure as to who did [make the first giallo], but Delitto al Luna Park (1952) by Renato Polselli [...] is a possible candidate." 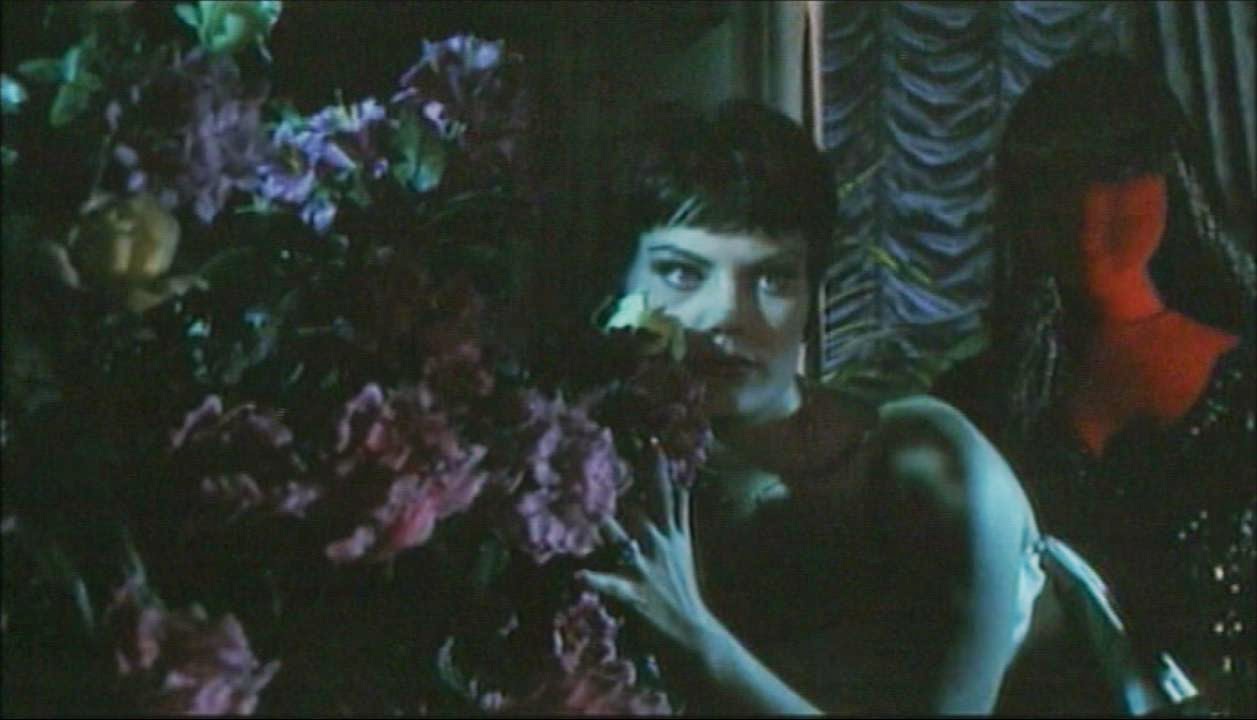 Also for the benefit of those unfamiliar, a few quick words about the plot... In a nutshell, the film is a whodunnit set in a fashion house where the models are being taken out one by one. There are suggestions of blackmail, drug abuse, abortions and other shady shenanigans... and nearly everyone seems like a potential suspect... and that really is all you need to know... the plot essentially being a jumping off point for a series of masterfully staged and sublimely photographed murder set-pieces.... As its original title, Sei donne per l'assassino (Six Women for the Murderer) suggests, Blood and Black Lace is a body count movie, and perhaps the very first... hence its huge importance to the horror canon. But rather than being a mere exercise in lurid exploitation (though much of the film's advertising would probably suggest differently), the movie might also be the first to conjure that strange, almost paradoxical blend of beauty and brutality that would become a hallmark of countless giallo murder set-pieces to come... As Tim Lucas suggests in his superlative DVD commentary for the film, Blood and Black Lace could be seen as being, among other things, about "beauty and its ruination"... Which reminds me of that oft-quoted line from Edgar Allan Poe: "the death then of a beautiful woman is unquestionably the most poetical topic in the world". 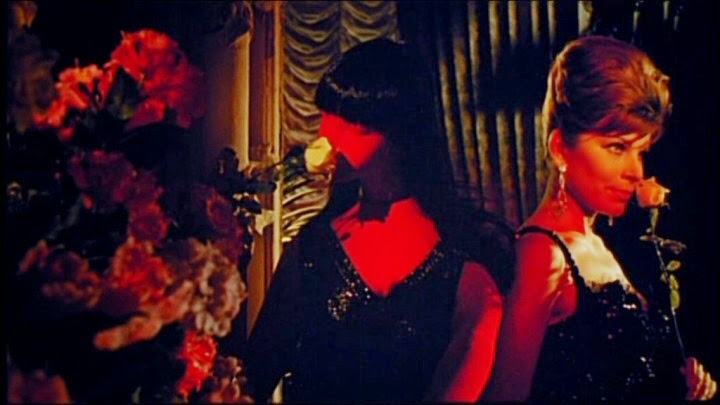 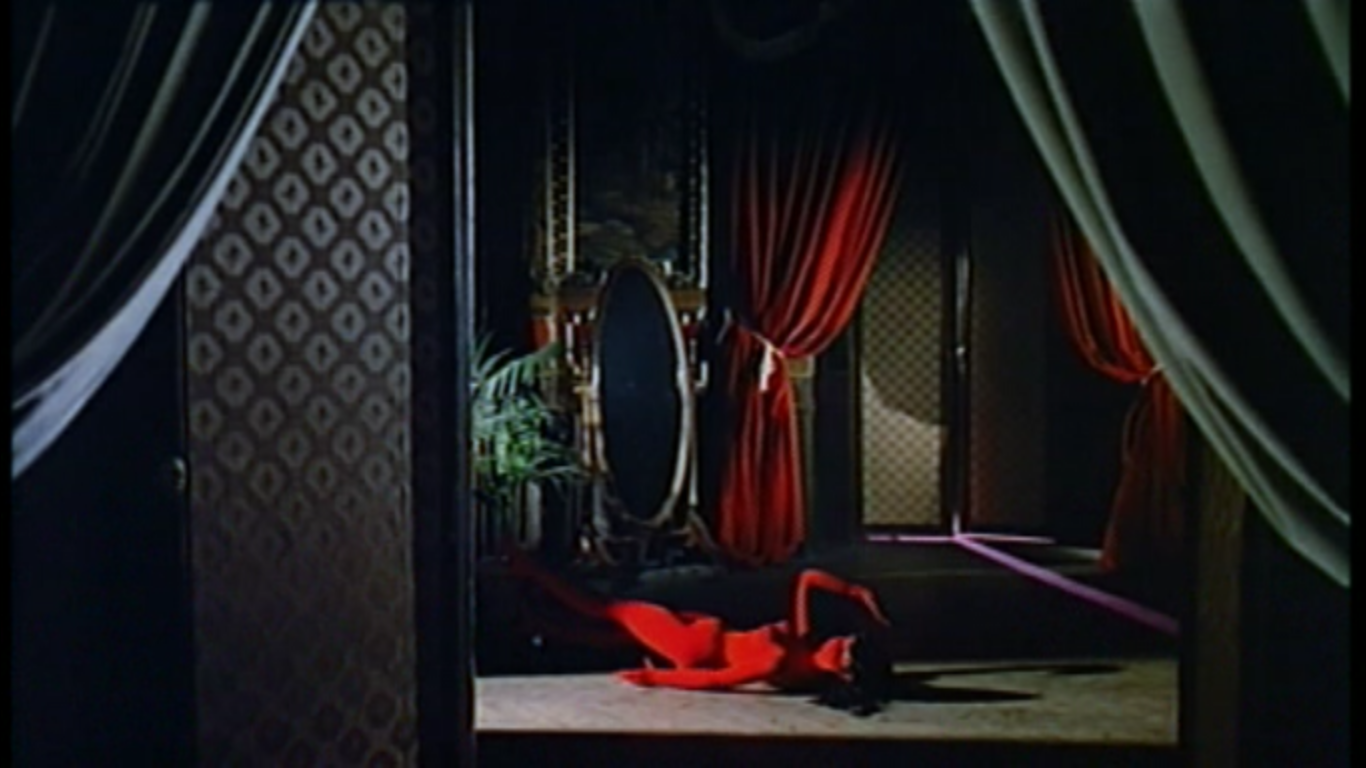 Even if you don't really care for horror films or murder mysteries, the film is undoubtedly worth seeing for the visuals alone.... It's just a shame there isn't anything approaching a definitive DVD version out there yet... The VCI disc I have looks good but is far from ideal (and also regrettably non-anamorphic), the German disc (from which most of these screenshots are taken, if I'm not mistaken) looks better and is apparently more accurately framed but is pretty expensive to acquire these days... I'm not holding my breath on seeing one appear anytime soon, but I imagine a Blu-Ray of this would look eye-poppingly spectacular... Still, in any form you can check it out currently, this is a visual feast from beginning to end. 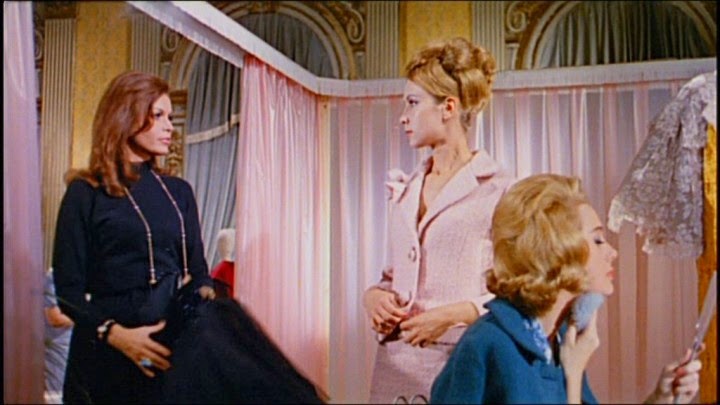 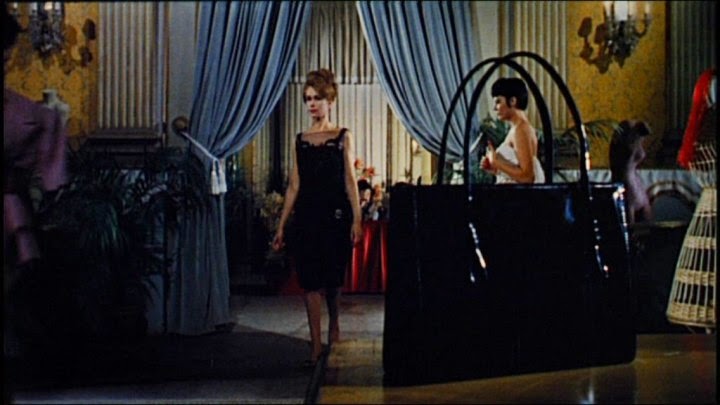 While this is undoubtedly Bava's show, it certainly wouldn't be the same film without his uniformly excellent cast and crew. The former is one of the best one can find in the maestro's canon, featuring such talents as Cameron Mitchell (who worked with Bava several times... it seems the two shared a mutual respect and admiration for each other), Eva Bartok, Thomas Reiner, Mary Arden, and other repeat Bava players such as Dante DiPaolo (who died late last year it seems) Luciano Pigozzi and Harriette White Medin. Kudos are also definitely due to cinematographer Ubaldo Terzano (who sadly parted ways with Bava after this... Tim Lucas suggests he felt his contributions weren't fully appreciated due to the director's formidable reputation) and composer Carlo Rustichelli, who contributes a memorable and effective score, its main theme hinting at the mix of intrigue and melancholy that suffuses much of the film. While I wouldn't necessarily recommend this to those completely unfamiliar with Italian horror (something like Suspiria or The Beyond is probably a better candidate... though I suppose it really depends on one's tolerance for/appreciation of older films), for sheer sensory satisfaction alone you can't really go wrong... as far as the plot is concerned in Bava's films, I've found that I only really start to appreciate them on that level after a couple of viewings or so... and that's not to say they are narratively weak... in fact if anything, I'd say that Bava is often quite subtle when it comes to story... 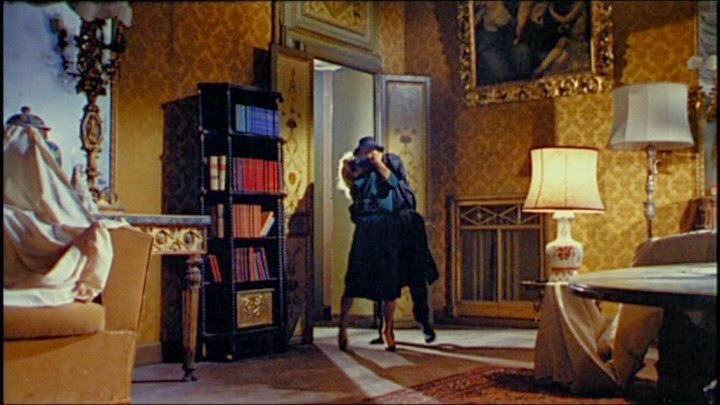 Anyway, I've gone on and pontificated at much greater length than I initially intended, so I'll simply say Happy Fiftieth Blood and Black Lace! And if you haven't seen it, then now is obviously an ideal time to take the plunge... and if you have seen it, watch it again!
Posted by Simon Wright at 1:44 PM 2 comments: