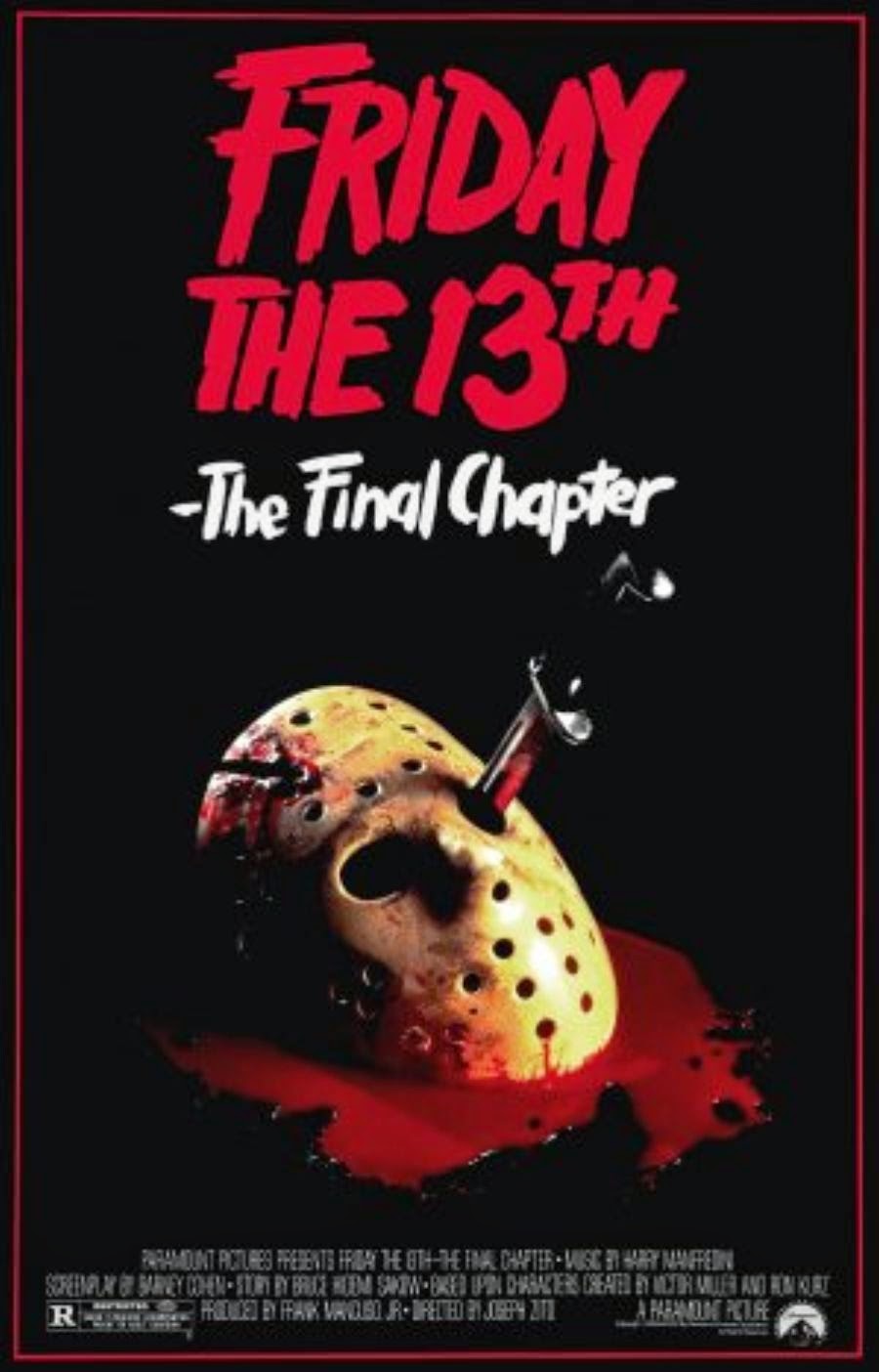 Released in U.S. theatres on Friday the 13th of April a whole 30 years ago, Friday the 13th Part IV - The [Far From] Final Chapter is (after revisiting the film last night) my current favourite entry from the franchise (barely dislodging Part II off its pedestal). And considering what day it is today, it seemed an ideal time to take a look at what is one of the better regarded entries from the series. 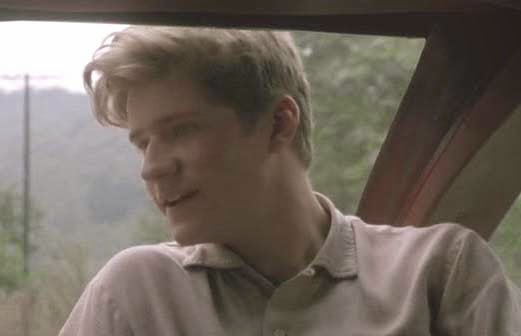 Picking up straight after the climactic carnage of the previous film, Part IV opens with an excellent piece of camera-work that winds in and out of police and paramedics as they attend to the scene of said slaughter. This sequence both sets the mood of the film very nicely and also assures us that we're in the hands of a more than capable director... and that'd be Joseph Zito of the underrated and hugely atmospheric slasher The Prowler AKA Rosemary's Killer (1981)... and funnily enough, that film and this both have superlative (and occasionally jaw-dropping) special effects from Tom Savini... but I digress... During this opening scene, we see Jason (who is presumed dead) popped on a stretcher and  taken away to the hospital morgue. At the hospital, the sexy shenanigans occurring between two staff members, the perpetually horny Axel (Bruce Mahler) and nurse Robbie Morgan (Lisa Freeman), seem (perhaps unsurprisingly) to be enough to resurrect the dead Jason, who quickly dispatches the couple and then heads off on his merry way... 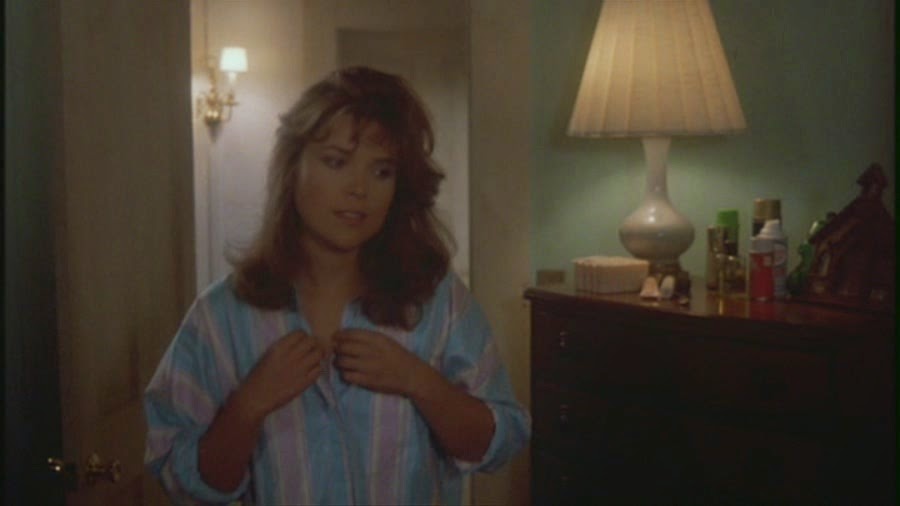 Following this scene of post-coital killing, we're introduced to the Jarvis family and some fresh meat for the grinder, ahem, I mean holidaying teenagers, who are renting the house next door. The family includes single mum Mrs Jarvis (Joan Freeman), daughter Trish (Kimberly Beck) and younger son Tommy (Corey Feldman)... and it has to be said, they seem pretty tight as a unit... plus, Mrs J seems to be a rather relaxed sort of mother, having no qualms about a bunch of partying teens temporarily moving in next door. Said group of teens are, as is invariably the case with these things, a mixed bunch of folk... and while some are more memorable than others (especially the double act of Crispin Glover's Jimbo and Lawrence Monoson's Ted), most have their moments and seem relatively (i.e. in slasher movie terms) real and three dimensional. 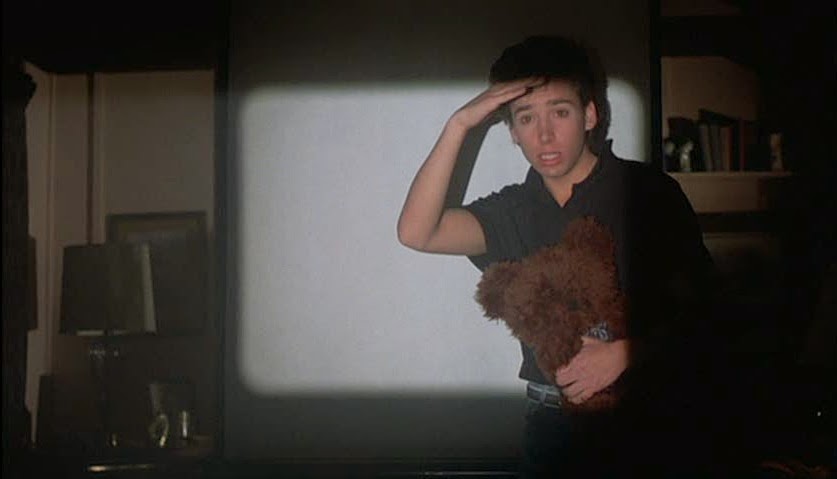 Like all the best films from the franchise, Part IV is both a good fun time party movie but is also highly effective on the horror front. The former is largely thanks to the chemistry between the uniformly game cast but also no doubt due in part to some choice one-liners delivered by screenwriter Barney Cohen... well, assuming some of these dialogue gems weren't improvised of course. And kudos to Zito and his DP João Fernandes for conjuring up some thick, dread-laden atmosphere. Some of the murder set-pieces in this film are arguably up there with the best the series has to offer, especially one set at night on the lake and another involving film itself. Also, regular composer Henry Manfredini returns, further adding to the air of foreboding hanging over proceedings. And speaking of music, Crispin Glover's crazy dancing to the tune of "Love is a Lie" by Lion (dubbed in after the fact... apparently it was AC/DC's "Back in Black" on set) is perhaps worth the price of admission alone. 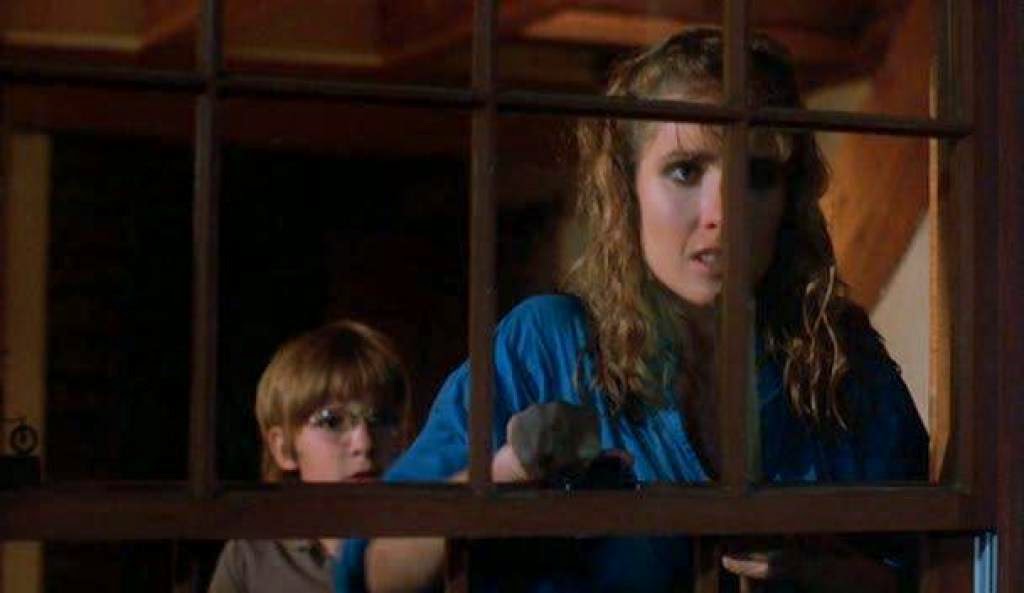 As usual, I feel like I've forgotten to mention something, but I'll leave it there for now.

So, if you're in the market for such things, tonight is obviously an ideal night (being not only the eponymous day but also a full moon apparently) to pull a Friday the 13th movie or two off the shelf... I'll be re-visiting the original (which I haven't seen in a few years) and Part V - A New Beginning (which I've only seen once) myself.

However you choose to spend it, I wish you all a very Happy (and hopefully not unlucky) Friday the 13th! 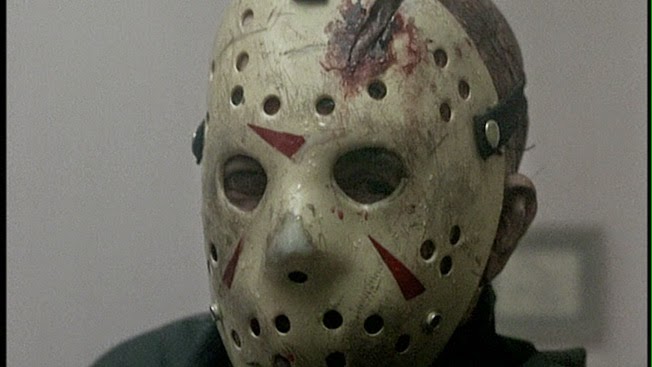 Posted by Simon Wright at 11:43 AM No comments: 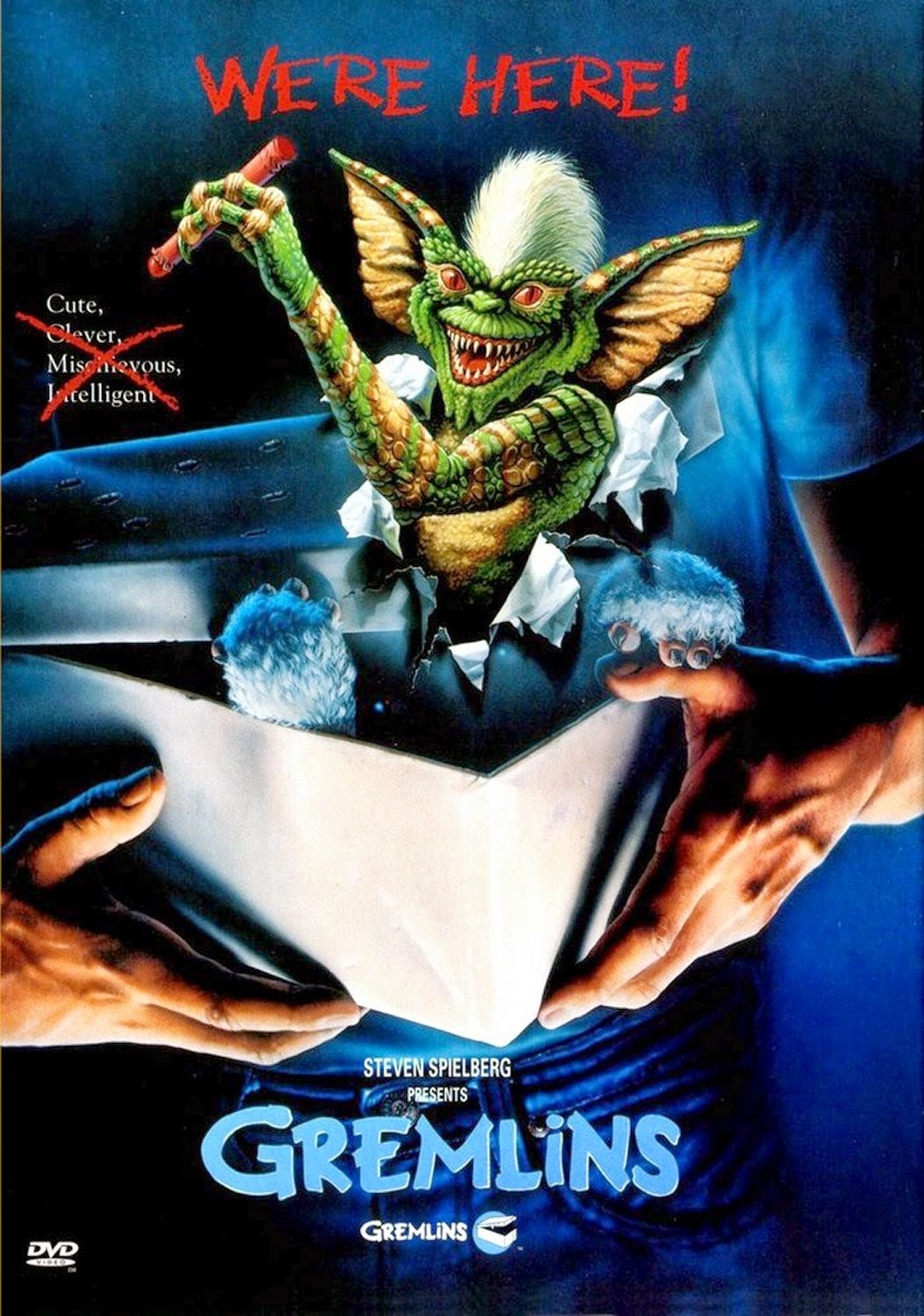 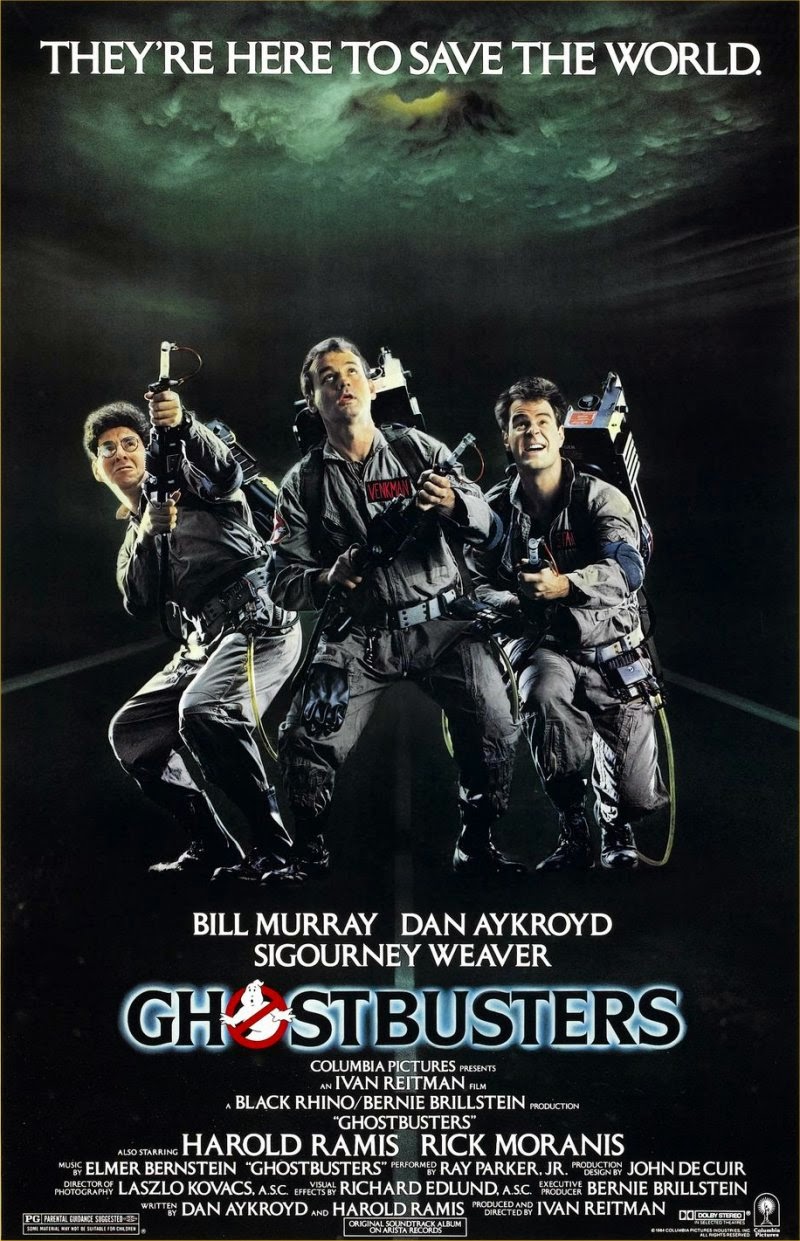 Today marks, if Blogger is informing me correctly, my 84th post... and therefore it seems highly apt that I should be using it to say a few words about two perennial favourites from 1984 which were released in U.S. theatres a whole 30 years ago today.

I'm assuming practically everyone and their dogs and cats are well familiar with both films so I'll skip the usual plot summaries, trivia etc. as I'm sure there's very little new I can add on those fronts. Instead (and as this is very much an 11th hour post), I'll simply take this opportunity to very briefly give y'all my tuppence on the two... 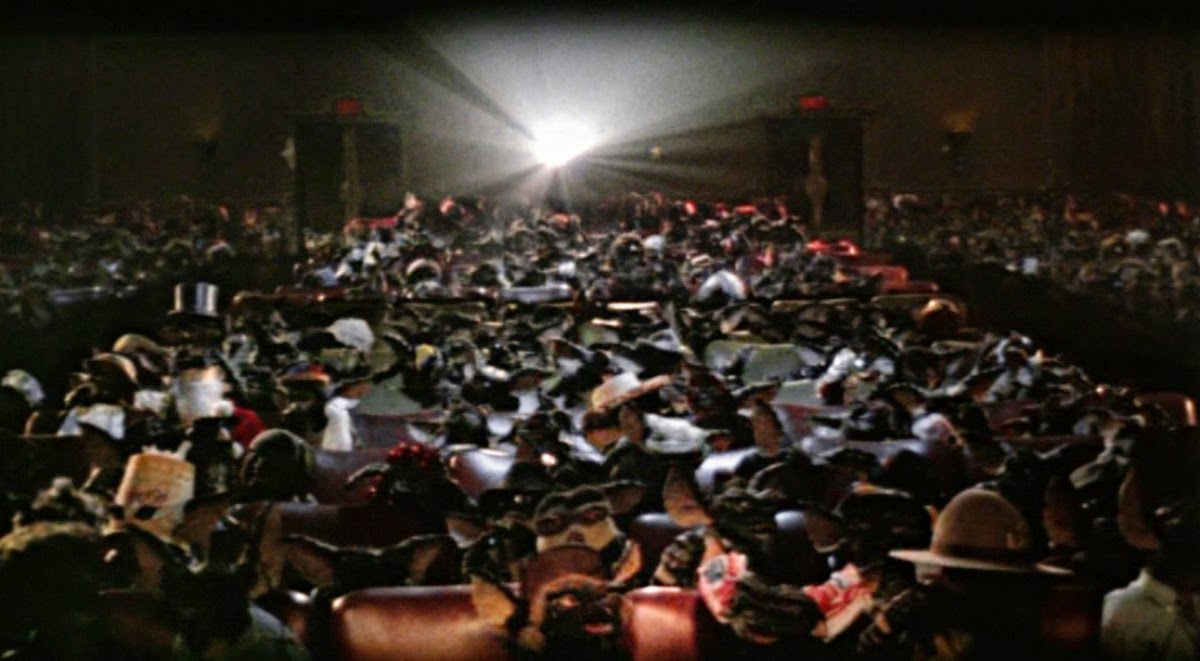 I enjoy Gremlins (and practically every Joe Dante movie I've seen) quite a bit but it's never been a favourite... though if I'd first encountered it a few years earlier than I did, I imagine this may have been different. On the other hand, I frickin' love me some Ghostbusters... As I've said elsewhere (I reviewed the film a couple of years back and probably said most of what I have to say about it there), Ghostbusters is the film I've seen more than any other... and it never, ever gets old. Horror, humour, action, buddy comedy shtick, screwball comedy shenanigans, the film practically has it all... in fact so much so that one can easily understand why it was such a smash hit. 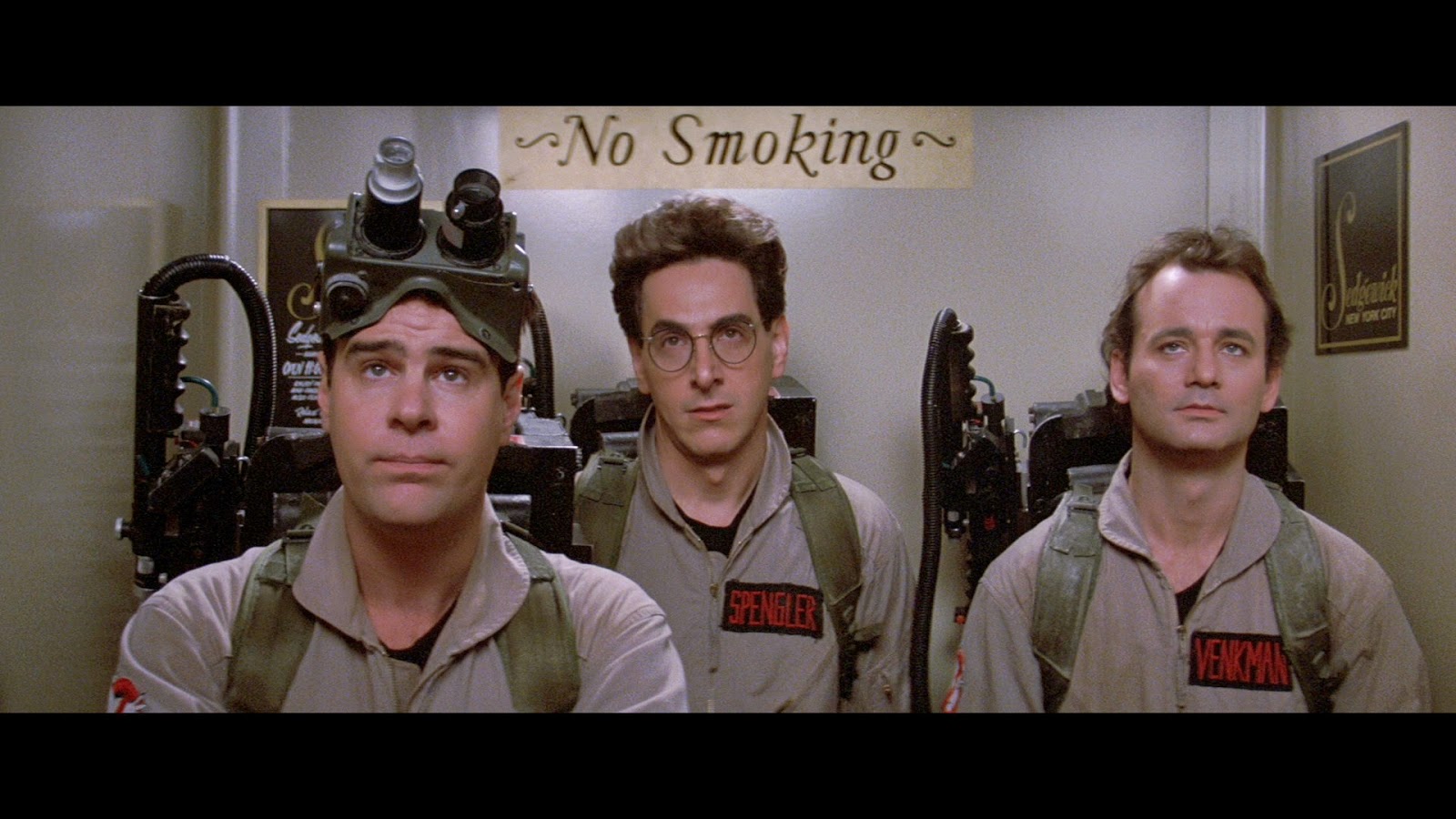 Both movies are arguably great gateway titles for introducing kids to the horror genre... scary in small parts, sure... but still generally light and action packed enough that the darker stuff doesn't seem to be much of a problem for most... even for many young kids... of course, one has to be careful though, as some can be much more sensitive than others. 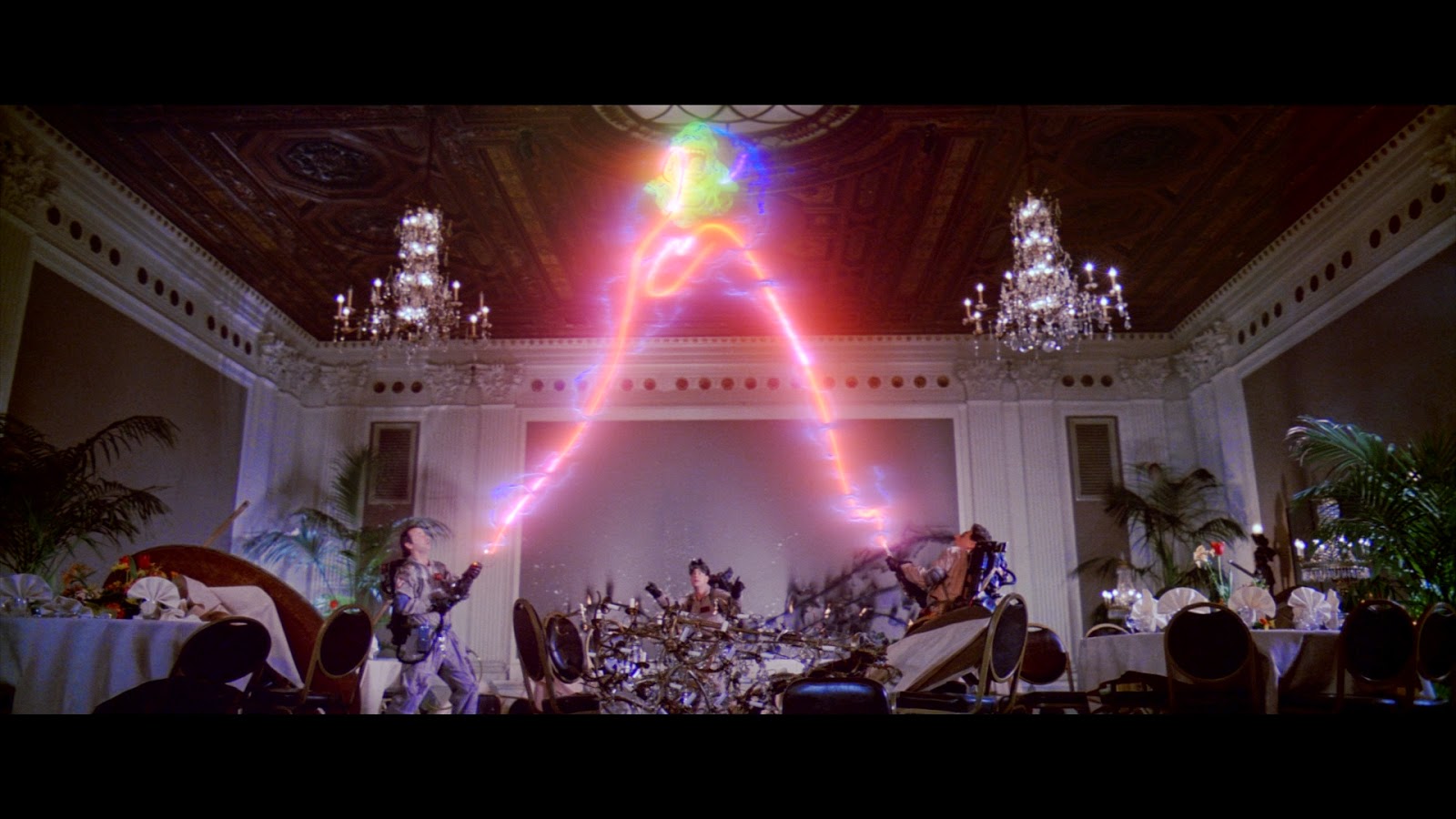 Aside from having a much longer history with the film than with Gremlins, I think another reason I prefer Ghostbusters is the humour. Sure, Gremlins has its share but it's not quite as consistently funny to me over repeat viewings... plus, the whole movie has a Spielbergian borderline saccharine quality about it (which should come as no surprise I suppose) that I have to be in the right mood for, where as I can never not be in the mood for Ghostbusters... scientists have even proved it to be so! 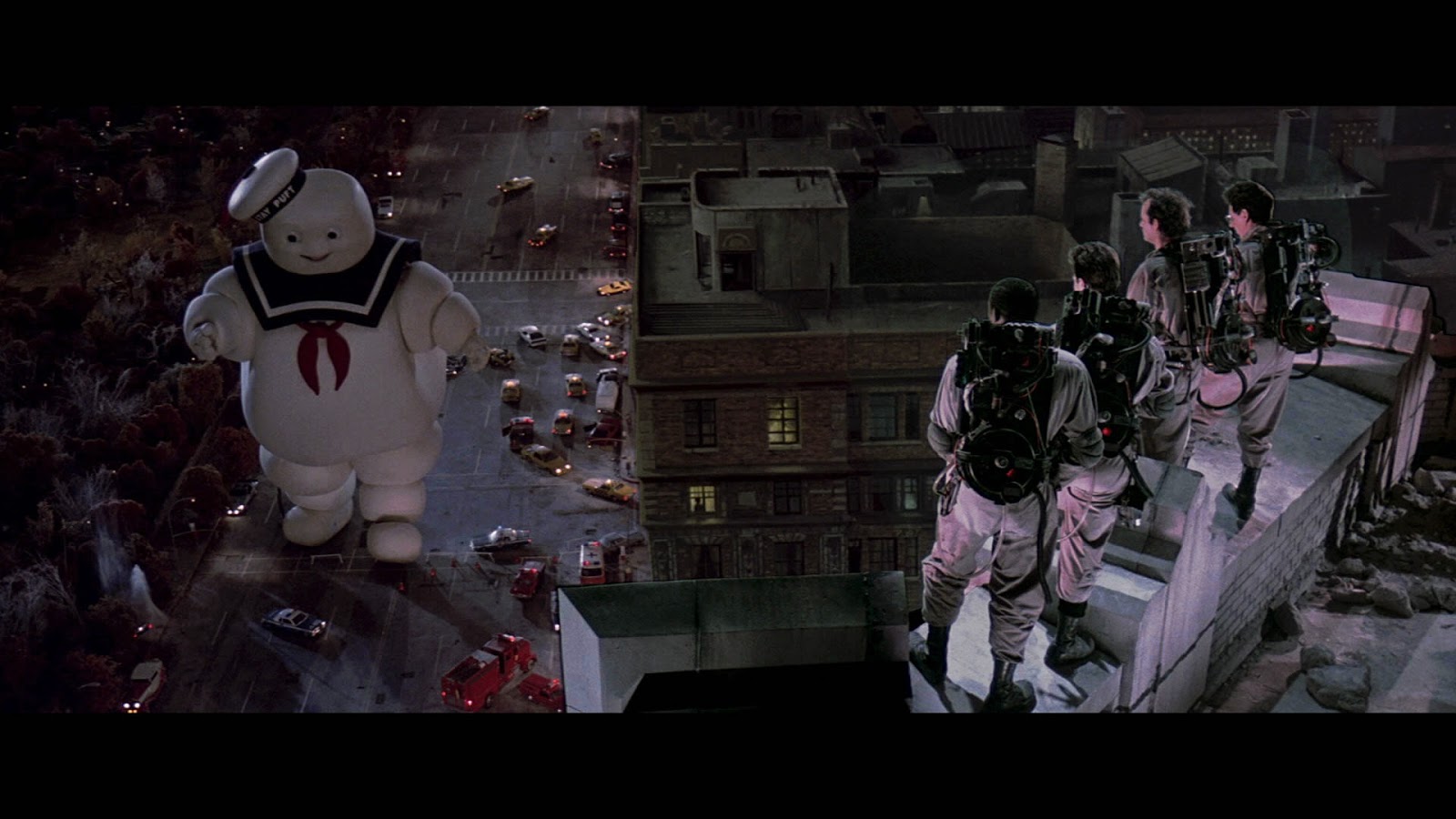 I can't really think of anything else to add for now (though if anything does occur to me, I'll add a postscript), so I'll simply say that if you're in the mood, tonight would be an ideal time to revisit one or both of these... and if you watch Ghostbusters, do raise a belated glass in honour of the late, great Harold Ramis while you're at it... As many said when news of the man's death first came out, his contribution to and influence on the last generation of American film comedy (and the current one) can't be overstated... and needless to say, he was an integral part of the Ghostbusters, both on-screen and behind the scenes.

Finally, a random, but somewhat related sidenote... I recently noticed that the 15th anniversary DVD edition of Ghostbusters is now (and this won't surprise anyone who is even half awake) a whole 15 years old... holy shit, I can't believe some of my DVDs are teenagers, so to speak... and while we're at it, where the hell did the last ten years go?!? Damn I'm getting old! 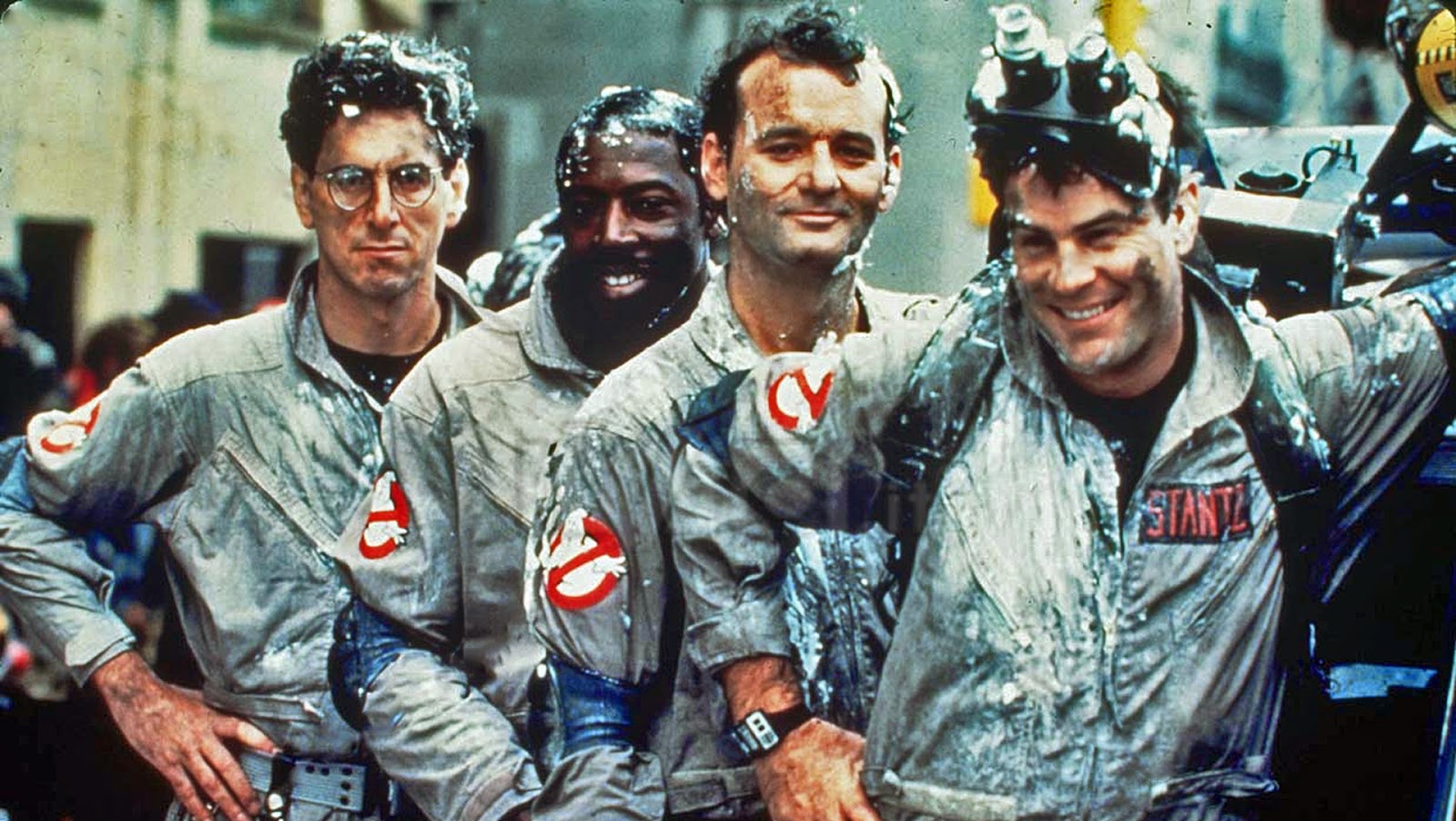