Halloween Hootenanny/Italian Horror Blogathon: Greats and Gems from the Golden Age - A Moviethon - Part I 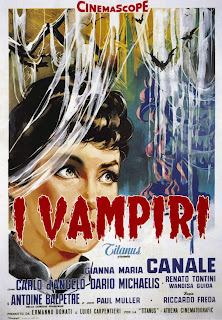 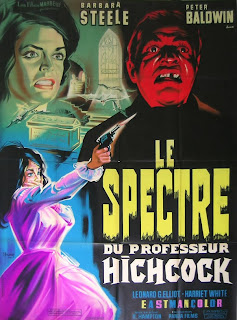 I'd recently acquired a couple of new Italian horror titles I hadn't seen before (including The Ghost, which we'll get to shortly), so I was itching to do another Italian horror-a-thon, and as I came to construct the playlist, a curious thing happened... when I was finished, my list of movies actually ran in chronological order, i.e. in terms of the year each title was released. And as it soon hit me that I was about to embark upon a journey through over two decades of the very best that Italian horror has to offer, I was super psyched to get going...

Before we begin though, a quick disclaimer... time has run away from me again today, so I've not been able to spend as long writing this up as I'd ideally like... so if I seem like I'm skimming the surface more than usual then this is why. As with yesterday's post, I may add some cheeky updates tomorrow. Anyway, let's crack on!

This seminal movie, created as part of a wager between Freda and some of his producer friends, is essentially the fountain-head from which all Italian horror (as we know it at least... I'm not currently aware of anything pre-war at present) would spring. As is often the case though, it would prove to be somewhat ahead of its time, and something of a hard sell for audiences, and especially Italian ones... apparently, some of the natives fled in terror from cinemas at the very sight of names belonging to their countrymen, which is why Freda, Bava and others would later make frequent use of Anglicised pseudonyms.

This movie frankly surprised me by having one foot in the modern world... in fact, I'd argue it's almost something of a proto-giallo (due to some black gloved shenanigans and a slight mystery angle at the very beginning) crossed with a gothic vampire romp. As a result, it calls forward to countless future Italian horror films, yet still somehow feels surprisingly fresh, despite its age and extensive influence upon later productions. 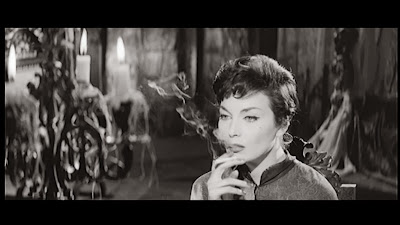 It goes without saying this is essential viewing for Italian horror enthusiasts, though I'll say outright that I can't really ever see it becoming a favourite... though having said that, I did enjoy it a lot more during this second viewing... if nothing else, I certainly appreciated it a lot more when I knew what sort of film I watching. In terms of story, it's serviceable enough, and even fairly engaging for the most part. Though the real reason to see this is undoubtedly for its cinematography and special effects wizardry, provided by that master magician of the movie macabre, Mario Bava. And as is generally well known by now, Bava's contributions went even further than this, as he would replace Freda when the director abandoned ship ten days into the twelve day shooting schedule (a condition of the bet) with only half of the script then filmed. Never one to shy away from a challenge, Bava somehow condensed the script and finished the film in the following two days. Freda would do pretty much the same thing again during their next project together, Caltiki - The Immortal Monster, though he suggests he did it on purpose this time to give Bava a push to become a full-time director. By the way, for the preceding info, I'm indebted to Alan Jones' informative liner notes on the film that came with the excellent Arrow Blu-Ray release of Black Sunday (where I Vampiri is included as a standard definition extra... it still looks very nice though).  Finally, and as a complete random side note, keep an eye out for Paul Muller here, who will turn up again later in the moviethon... and come to think of it, his appearance here may actually call forward slightly to his performance in that later film. 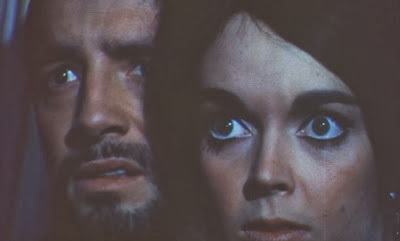 The second movie of the day is also from Riccardo Freda, though this time without support from his friend Mario Bava, who was now kicking ass and taking names himself, releasing both Black Sabbath (which will come up again soon) and The Whip and the Body in this very year. But as I've rather enjoyed all the Freda films I've seen so far (specifically Liz and Helen and Murder Obsession) and have heard great things about this one, I'm hugely excited to finally get chance to see it. The copy I watched (from a Mill Creek 50 movie pack) is far from ideal, seeing as it's a pan and scan job that's apparently somewhat cut... but as the film itself cost me something like 25p (if that), I really can't complain... 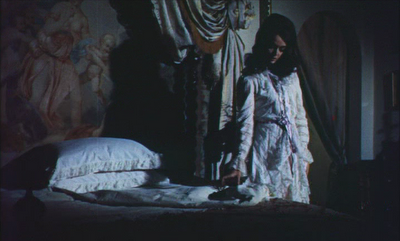 Apparently something of a pseudo-sequel to Freda's own The Horrible Secret Of Dr. Hichcock, released the previous year, the film features Barbara Steele and Peter Baldwin as a pair of lovers who are planning to knock off Babs' husband, Dr. John Hichcock (Elio Jotta). You'd think this would be a walk in the park, as the guy is both paralysed and also possessing something of a death wish (to put it mildly) anyway... in fact (and this isn't giving anything away, as it happens early on) he tries committing suicide in front of both his wife and her lover (who just so happens to be his doctor), so you'd think it'd be no sweat to finally help him off this mortal coil. As you might expect though, when they come to do the dirty deed, the dude proves seemingly harder to kill than they first anticipated... or more specifically, now he seems to have decided that being dead is perhaps not all he'd originally hoped, as Babs and her lover start seeing (and hearing) the guy's ghost all over their big spooky Scottish abode.

I'll say no more, as I wouldn't want to spoil anything. It occurs to me that the movie has shades of an earlier and more famous genre effort, but I can't even mention what that is without potentially giving the game away. What I think I can say though is that if you like mysteries with horror elements and old dark house atmospherics, you really can't go wrong here. I would absolutely love to get my hands on a proper widescreen edition of this as I'm sure it looks sublime... plus now I'm really itching to check out its predecessor. 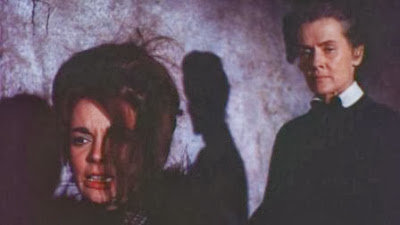 Finally (well, for now at least), I said earlier that Bava's Black Sabbath (also from this year) would come up again, and there's two things that connect that more lauded film to Freda's underrated gem. Firstly, Harriet Medin (seen above on the right) appears in both films, having a brief cameo in the "Drop of Water" episode from Black Sabbath, where as she has a much more central role here as housekeeper/psychic medium Catherine... and incidentally, I just remembered she also shows up in The Whip and the Body... needless to say, 1963 was a pretty productive year for her. The other connection to Black Sabbath, and this time to "The Wurdulak", comes in the form of a dog that won't stop howling... and if you listen, I'm sure it's the same frickin' dog as well! And without going into specifics, they both befall the exact same fate. We know Freda and Bava were pretty friendly, so one wonders if they ever went over each other's upcoming scripts when they were chewing the fat and talking shop.

To both reiterate an earlier point and finish today's post, I'd say that both films are must sees for Italian horror obsessives, but perhaps not for those who are only familiar with say, Suspiria and The Beyond, to cite two typical gateway movies. If you're looking to get into some of the older stuff, and have yet to see any Mario Bava, I'd say Black Sabbath is probably a good place to start, as I suggested in my review last October, which can be found here.

To be continued tomorrow..... 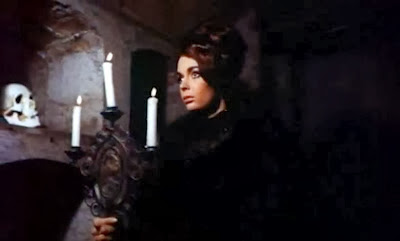