I've put off making and posting lists on the blog so far (not to mention updating regularly... but let's not speak of this year's "wilderness period"... or last's for that matter...), as ranking one's favourites of anything can be a bit of an agonising process; that is, it's hard to stick such things in a hierarchy, as current favourites tend to fluctuate frequently, depending on what I'm craving during any particular period of time. But seeing as I always love reading/hearing other people's lists so much, I thought I'd finally give it a go.

This first countdown will be the start of what I hope to turn into a weekly series (honest). Inspired by the recent vote (and subsequent debate it sparked) taken on Dreadit (that's the horror subreddit for Reddit if anyone's unfamiliar), I give you my Top Ten Favourite Slasher Movies.

As with the aforementioned poll this list will be sans sequels; I'll do a separate list for those babies in the none too distant (in fact Dreadit is currently taking votes for that list now if anyone's interested).

Finally, before we get started a quick disclaimer: this list is highly subjective and is no doubt extremely likely to change. 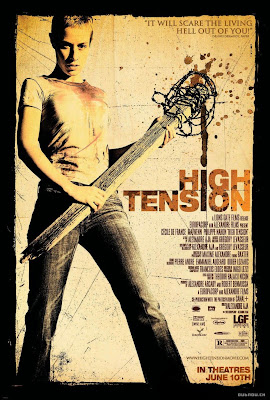 Straight in at number ten (quite literally, as I watched it for the first time last night; I'm damn late to the party, I know) is this superlative French take on the sub-genre. For the most part, this is the slasher stripped down to its bare, cat-and-mouse essentials; the set-up being deceptively simple and much of the nerve-racking action being wordless. The ending is understandably contentious and I'm not sure where I stand on it yet, but to be honest I should have seen it coming.... In fact, I was sort of half thinking it might go the way it did and then somehow got sidetracked from that line of thought by the sheer, unbearable suspense of the thing. 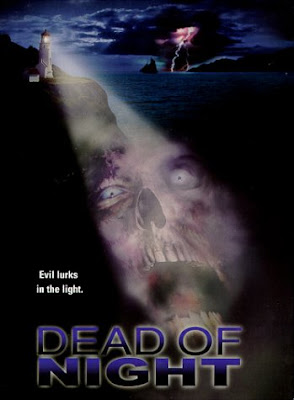 This relatively unknown British slasher is admittedly a bit of a slow burner, but it gradually builds to a truly explosive and awesome final showdown. If you're like myself and love horror movies as much for their general ambience as their action, then the somewhat unhurried pace of much of this movie won't bother you; the film's eponymous location provides an ideal backdrop for lots of stunning lighting and a suitably oppressive, claustrophobic atmosphere. As a side note, it's just occurred to me that it also has slight shades of John Carpenter's Assault on Precinct 13. 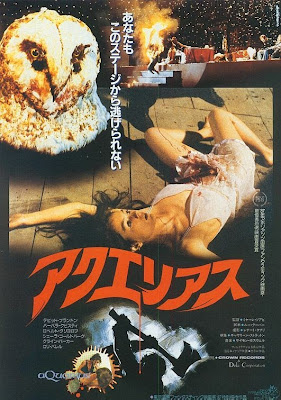 If I'm in the mood for a spaghetti slasher but don't want to order it from giallo town, so to speak (that's a whole other list entirely, even though there's admittedly a large overlap between the two sub-genres), then this is one of the first I'd pick off the menu (which includes other favourites - which didn't make the list - like Martino's Torso and Fulci's New York Ripper; incidentally I first encountered both those movies as part of an unplanned double bill... see here for details... hang on a minute... those two are actually closer to being gialli than slashers... well, you can ignore that little aside then... oops!). Gloriously gory, occasionally dreamlike and beautifully stylised (three things I frankly expect when I'm ordering Italian), Soavi's directorial debut is hands down the finest late eighties slasher I've seen so far. 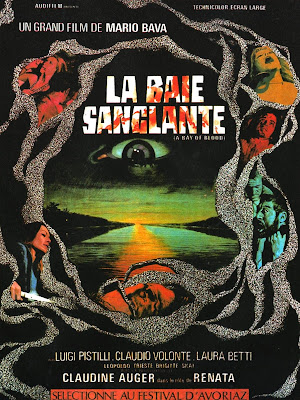 Staying in Italy, my next choice is the film usually cited as being the giallo that served as ground zero for the slasher film, although one could argue that Bava's earlier Blood and Black Lace and the flood of gialli it inspired are equally responsible. Nit picking aside, this still stands head and shoulders above most of its imitators (on both sides of the Atlantic) due to its superior style and a heavy emphasis on dark humour somewhat atypical of the genre. Often described as a gory take on Agatha Christie's Ten Little Indians, this black comedy masterpiece is also something like an ultra-violent version of Ealing's Kind Hearts and Coronets, albeit with a slightly different structure. Containing unexpected moments of melancholy and featuring one of the most wonderfully bizarre, strangely upbeat yet perfect endings I've ever seen, this is one of Bava's crowning achievements. 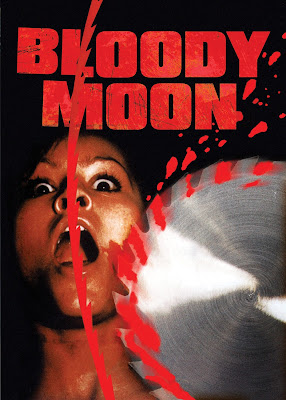 This movie was my introduction to the late, lamented, one man film industry known as Jess Franco. Sublimely cheesy, frequently surreal and borderline unhinged (i.e. animal violence and incestuous shenanigans... I'll say no more), this is definitely one to file under 'guilty pleasure', but frankly I've got no shame in confessing my affection for it. Its strange blend of hilariously unreal dialogue, general trippiness and disco (both regular and roller) is somehow completely irresistible to me. Now you may be wondering what kind of person in their right mind would rank this above A Bay of Blood, and that's certainly a valid question, but this is a favourites list, so it's more about what I find compulsively re-watchable, as opposed to creating a canon of which I think are "best". 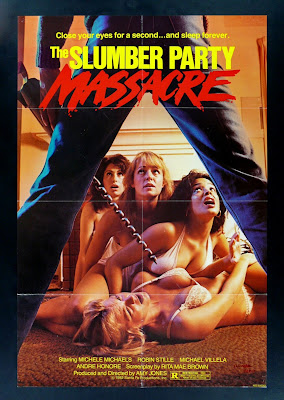 Another slasher I can happily stick on any time I'm in the mood for shits and giggles is this thoroughly loveable parody of the genre. As is usually the case with these things, it's all the more hilarious because it's played totally straight. To me this movie is also a great example of what Tarantino terms the "hangout movie"; that is, one you find yourself returning to because of the characters as much as for any other merits the film may have (come to think of it, quite a few slashers fit into this category)... Plus, at only 77 minutes long it has no fat in need of trimming whatsoever... 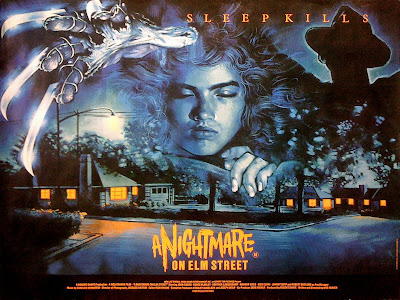 By no means the first supernatural slasher, but certainly one of the best, A Nightmare on Elm Street was another of those gateway drug movies for me. I mean that in the sense that it was the first I saw which gave me a taste of the horror genre's ability to conjure up an intensely dreamlike/nightmarish atmosphere. And even though I've seen it countless times, there are scenes (Nancy falling asleep in the classroom is the stand out one for me) which still never fail to give me that eerie, destabilising sense that reality has taken an abrupt left turn through the looking glass. Finally, even though Freddy became something more akin to a murderous prankster (teetering towards self-parody) as the series progressed (and don't get me wrong, I love all the sequels that I've seen), somewhat obscuring his status as a child murderer (and implied molester), his menacing presence in the original movie remains undiminished to me. 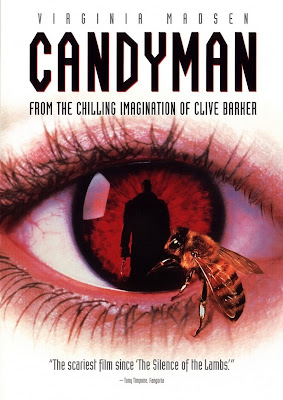 Like my last choice, Candyman is another supernatural slasher and seminal film from my early teens that helped solidify my love of horror. Now some might not view this as a real slasher, but as far as I'm concerned it contains enough of the relevant DNA strands to qualify. Sure, if you want to split hairs, its far from a straight take on the form, taking elements from both the psychological thriller and arguably even the ghost story, but to me this is what makes it so endlessly fascinating. The ending could be seen as killing some of the tantalising ambiguity that was created up till that point, but thinking about it just now it occurs to me that things might not be how they appear on the surface (I'm trying to avoid being specific in case anyone hasn't seen it; I'll definitely be doing an in-depth look at this one soon, where I'll go further into this). Also something of a meditation on race relations and the power of storytelling, Candyman is one of the richest films the sub-genre has to offer. 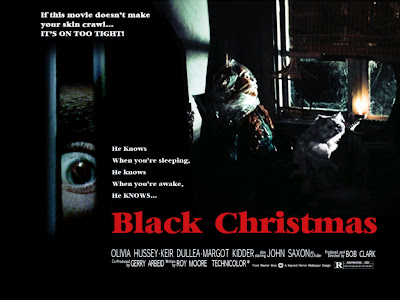 My favourite film from both the sorority and yuletide slasher sub-genres, Black Christmas is another sort-of "hangout movie" that creates a potently atmospheric sense of time and place, and features fleshed out, believable characters that you give a shit about (even Margot Kidder's bitchy drunk is oddly likeable, as she's far from one-dimensional). The cast in general is stellar, featuring the likes of Olivia Hussey, 2001's Keir Dullea and genre legend John Saxon. One of the things that makes this one so repeatedly rewatchable to me is its masterful balance of horror and comic relief, with one never adversely affecting the other. Though I haven't seen this film anywhere near as many times, I think in some ways it might be superior to my number one choice... 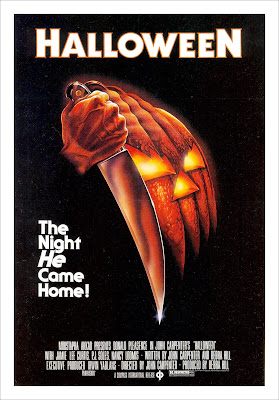 Initially, I tried to resist the notion that this is my favourite slasher... I mean, come on, it just seems so damn obvious. But, the more I thought about it, the more I found I couldn't escape the overwhelming truth of the matter. The facts of the case.... 1) This was the first slasher movie I ever saw as a kid (not to mention balls-out horror film, period)... 2) I've seen it more times than I could possibly begin to count, and on every format I could get my hands on (see here if you want to read about my experience watching it theatrically last Halloween by the way)... 3) I could (and probably will) watch it as many times again, as it's one of those films (The Shining also springs to mind) that has me completely, hypnotically spellbound once the first frames start to roll... hell, even if it comes on TV part way through I'm usually compelled to watch it to the end... 4) I can't think of a single flaw in it... seriously, and I know I've said this before, but if you want to know how to make a horror film, just keep watching Halloween and take notes from a master.
Posted by Simon Wright at 3:59 PM